This Rajma Masala is an Indian version of the Bean Chilli – Soft kidney beans cooked with exotic spices in an onion & tomato based gravy. 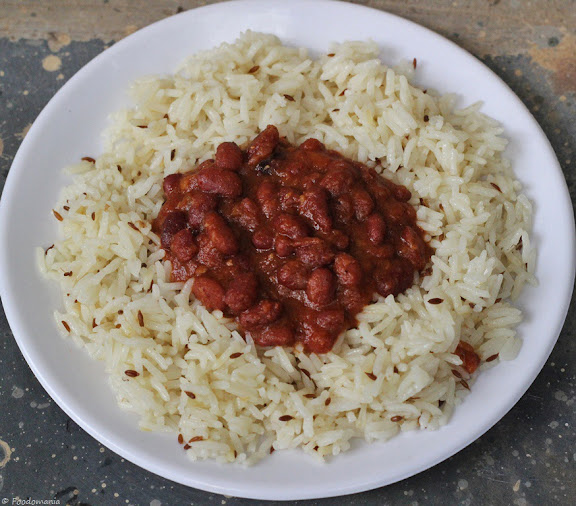 Kidney beans are referred to as Rajma in India. And the spicy gravy based dish that is commonly prepared is known as Rajma Masala. It is usually served with Rice or Roti. Rajma Chawal, a combination of the rajma masala and rice is one of the most popular meals served in many parts of Northern India.

Once a week, I get my dose of proteins from kidney beans. I like them in almost any form. Boiled, made into a patties, tossed with a salad dressing or cooked into this deliciously spicy curry. I like to serve Rajma with Jeera Rice. In my opinion, the mildly fragrant Basmati rice paired with a delicious bean curry has got to be the best meal ever.

Now, before we move on to the recipe, let me tell you what is different about this rajma masala recipe and why you should definitely try this one… 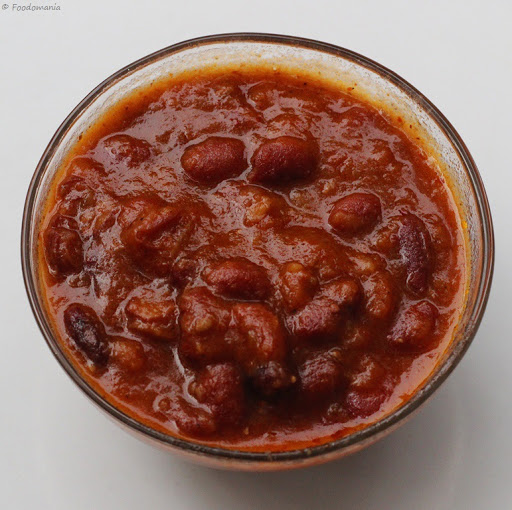 I cook the kidney beans – twice. Have you ever eaten under- cooked beans? They give you a tummy ache! I cook the beans once ahead of time to make them soft (you can probably skip this step if you’re using canned beans). Ten I like to cook them again with all the spices – so that the flavors seep deep into the beans.

Secondly, I like to blanch the onions, ginger and garlic – well. This reduces the pungency and makes for a subtly spiced gravy. You can directly grind the onion and tomato without blanching them too. You’ll probably end up wth a slightly more pungent gravy.

And finally, I almost always use the pressure cooker. It makes my life a lot more easier knowing I don’t having babysit the beans whilst they are cooking. If you cook rice & beans regularly, I suggest you invest in a pressure cooker too!

This recipe may involve a few more steps than a regular Rajma masala recipe. But trust me, none of these steps are difficult and you’re going to end up with a perfectly flavorful bowl of rajma!

Here is a quick video tutorial –

Cooking the Kidney Beans – in a pressure cooker

Cooking the Kidney Beans – in a saucepan

Soak the kidney beans in water overnight. Then drain and rinse the beans well. To a pressure cooker, add the beans and fill the cooker with water. Also add the whole onion, garlic and ginger pieces. Cook for 8-10 whistles or until the kidney beans are soft and mash-able. (it may vary depending on the quality of your kidney beans) 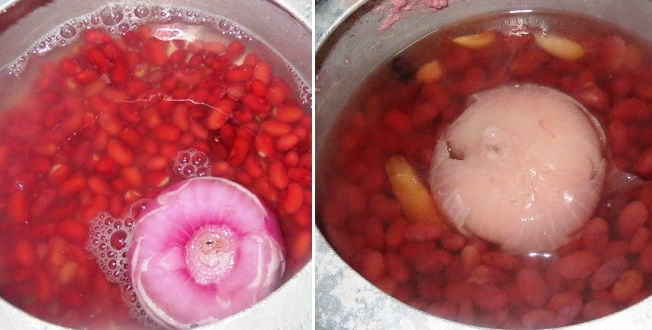 Fish out the onions, garlic and ginger from the cooker and add them to a blender. Grind to a smooth paste. Add the blanched (or regular) tomatoes and give a blitz.

Heat oil in the same cooker (remove the kidney beans onto a bowl). Add a bay leaf and a stick of cinnamon and let them cook for a minute till the aroma comes. Add the onion and tomato paste and cook for 4-5 minutes on medium heat.

Add the spices – Garam masala, red chilli powder, dry coriander powder and mix well. Keep stirring frequenty so as to avoid burning. Once the paste reduces and you start to spot oil coming out on the sides of the pan, do a smell check to ensure that the raw smell of the spices & onion has gone away.

Add the kidney beans and mix well. Again cover the entire mixture with some water. Add salt to taste and a pinch of sugar. Mix well and let the mixture come to a boil. Close the cooker lid and again let it cook for around 8-10 whistles. Let the pressure release completely. Open the pan, fish out the bay leaf and cinnamon stick.

Serve with a bowl of rice or wholewheat tortillas 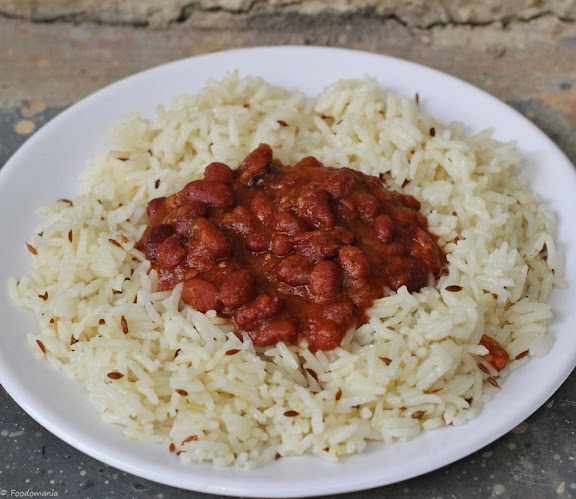